More and more of the offices at Television Centre are now empty as their former occupants move out to new premises elsewhere in London and Salford. Trouble is, if you lie on a trolley for long enough, the removal guys will come along and cart you away. 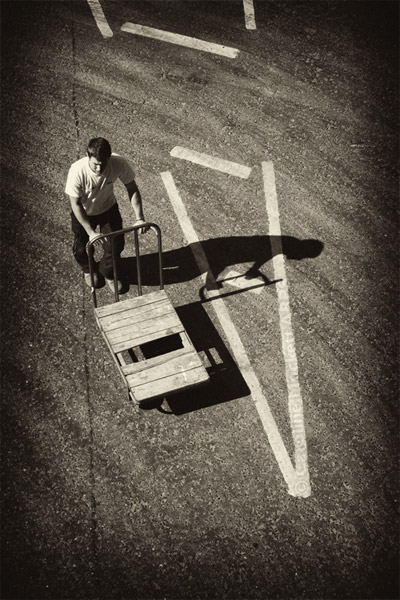 I’ve just returned from a fortnight in Florida and thought I’d write a few things about my experience with my Panasonic GF1 kit.

The trip wasn’t primarily a “photographic” holiday as I was visiting with friends who aren’t really keen photographers. It was more about going to the theme parks and having a bit of fun. So I didn’t want to be burdened with my big DSLR equipment all the time. But on the other hand, I wanted something more versatile than a little digital compact as there may be plenty of opportunities for pictures in difficult conditions, not to mention image quality issues with compacts.

Before I set off I was a bit apprehensive as to whether this setup might “cope” with the sort of pictures I like to make. I’m not one to shy away from dingy conditions, low light, or fast action stuff, and I didn’t want to just end up with a load of average holiday snaps by avoiding these situations.

Two other essential items I packed were the bolt-on LCD viewfinder for the GF1 (the rear screen is clean and bright but when the sun shines full on it, it can be rather difficult to see what’s going on – mainly due to seeing a lot of your own reflection!) and a gorillapod which would handle the size and weight of the 45-200mm lens.

Here are some of favourite pictures from the trip.

Having The Right Lens

This lovely little wader wasn’t too far away for my 45-200mm zoom to catch a good shot!

Two diverse but equally tricky lighting situations – dusk and artificial light at Universal and full-on sun into the lens watching the pirates at Legoland – both handled with aplomb by the GF1.

You don’t get much lower light than trying to photograph fireworks. With the aid of a statue of Mr Walt Disney himself (I balanced the gorillapod on his head!) I got some great shots of the firework display at Magic Kingdom, using a 2 second self-timer delay to avoid camera shake, and hoping to capture the right moments.

I found a railing to wrap the gorillapod around at Epcot Center for this long exposure shot of the brightly-coloured fountains after dark.

When you’re used to the near-instantaneous response of a DSLR when you press the shutter button, I wondered if I might miss the “decisive moment” with the GF1. It isn’t quite as responsive, but far better than most digital compacts, where you press the button and about 3 seconds later something happens!

Hulk is one of the fastest-accelerating rollercoasters in the world. This is just at the top of the first curve – it’s moving pretty quickly but a fast shutter speed and minimal lag got me the shot.

I knew this explosion was coming, but not exactly when. So having minimal shutter lag was very useful once I reacted to the bomb going off. I had already pre-focussed on the aircraft, but the light levels suddenly changed with the flames – so the camera did well to cope with that exposure correction too.

We saw the hippo on “safari” at Disney’s Animal Kingdom. We were in the back of a truck on a bumpy road, and never actually stopped. This was a grab shot between ruts in the track!

Part of space history, this Apollo capsule was on display in a quite dark room at Kennedy Space Center. There was nothing nearby to rest the camera on, so it was brace, breathe out and hope the IOS did its job. It did!

With the help of IOS lenses and the gorillapod, I tried not to push the ISO up too high, but sometimes it was unavoidable. Generally I was very pleased with the lack of discernable ISO noise in the images.

With hindsight, I need not have worried about the equipment’s capabilities. I made hundreds of images I was really pleased with. The camera and lenses proved easy to use and plenty versatile enough for any situation I cared to throw at it.

Would I take just this gear if I were going on a big photographic trip? Probably not, but then it’s horses for courses. And for this holiday, the Panny worked out just fine.