You may recall that I had been contemplating a change from my Canon 70-20mm EF f/4 L USM lens a few months ago. It’s main failings for me were insufficient focal length at the long end to justify carrying it around with my 24-105mm EF f/4 L IS USM and lack of Image Stabilisation which was a hindrance in low light situations.

Since then I’ve been thinking hard about a suitable alternative. Recently Canon’s 70-300mm EF f/4.5-5.6 DO IS USM caught my attention. So a couple of weeks ago I decided to invest. I purchased a second hand model from Camera World in the West End, who also took my 70-200mm lens in part exchange, which helped my wallet somewhat!

I had not previously heard of the DO series – it contains a Diffractive Optical element that, according to Canon, “delivers compact size, low weight and superb image quality”. Sounds great! The DO is  designated by the green band around the front of the lens.

I have used it a few times since buying on 11th June. The weather has been rather appalling or I would have taken it out more!

I photographed Utopia during a dingy evening out at Heybridge Basin with the GNPC folks. The IS in the low light was a great help! This one nearly made it for Day #1627.

Yesterday I managed to cram in two photoshoots. I made these during the first, a family visit to RHS Hyde Hall:

I loved the soft background bokeh and clarity of the main details in both images.

During the evening I went to Maldon for another outing with the GNPC members. There was a Morris side practicing on the quay who proved to be fruitful photographic material:

The long focal length really helped to isolate them from their background and meant that I wasn’t trampled underfoot (or clog) to get the shot I wanted.

The evening light was very pleasant. I made this shot of the Thames Barge coming back to port with an evening excursion.

So, my first impressions are very positive. The size and weight of the lens is great (a mere 100mm long and 720g). The Image Stabilisation seems to work well, and I have no worries with the low-light performance. Certainly if I’m going anywhere and don’t want to lug the 100-4oomm zoom about with me, this makes a great alternative.

What to do on grim grey days, when you know you have to get a picture? I’ve been in that dilemma many a time over the past 3 years, and have accumulated some great bits and pieces for the props box, which is where I turn for inspiration and colour on wet weather days.

It’s full of things from craft shops and stationery outlets. I can’t go past Hobbycraft or Paperchase without having a sneaky look inside. It’s paid off, as many of these items have helped me make great images in my tabletop studio. This is what’s currently inside the box:

And here’s what has come in handy, with some examples (from back to front):

So there you have it! I’m sure you’ll see some more of them in the future.

In these Limit Yourself posts, I’m going to take one element of picture making and suggest you pare it down to the minimum and see what happens.

We are all given thousands of choices every day, and even with photography there are so many ways to take a particular scene or image that sometimes it’s hard to decide what is best.

For the first topic, I suggest limiting yourself to one or two picture elements and try to take as may different set-ups and compositions as you can. See how each changes the mood or feeling of the picture.

Initally, I started off with rather too many elements: There’s too much stuff, and the central composition was rather boring. So I cut it down.

Here’s what I did with just two pieces of paper and a couple of feathers: [Feathers to the Left – they were different sizes, so I knew I wanted to accentuate the asymmetry] 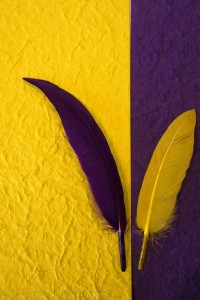 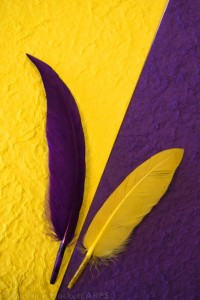 Two vertical format versions, each with its own merit. I quite like the diagonal which is now creeping in – it give the shot a bit more dynamism. In the end, I decided to go with this composition for Day #741. It’s just my personal preference, but it was worth experimenting to see which I liked best.

Why not have a go at limiting yourself too?