After my informal behind-the-scenes look around the Barbican the other day, I’ll be interested to see other buildings which will take part in London Open House weekend 2006.

It’s the annual opportunity to snoop behind the normally-closed doors of some of London’s best architecture. Everything from the London Assembly building (known by some as Ken’s Palace) to private houses (like the lovely 9 Wilton Way, Hackney, as featured on Grand Designs).

Here are a few examples from past LOH events: 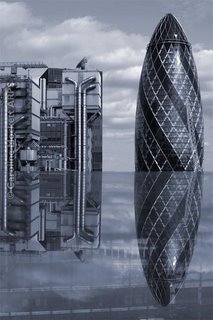 [Above] Double Vision, taken from the roof of Plantation House on Fenchurch Street in 2004, looking towards Lloyd’s and the Gherkin. 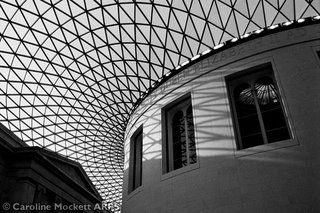 [Above] Glass Ceiling of the British Museum, taken around the time of the 2003 event. 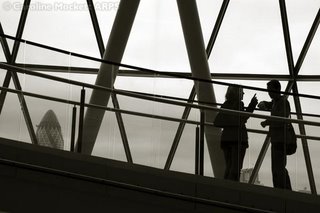 [Above] Making Her Point , members of the public on the big spiral ramp inside the London Assembly Building, during the 2005 event.

It seems I like to take mono images during these days out! Anyway, you can see some more photos from the day out last year.

I missed it last year, but did enjoy the day out in 2004 when the stage covered 1-mile laps around Westminster. Here are a couple of pictures I took from that event: 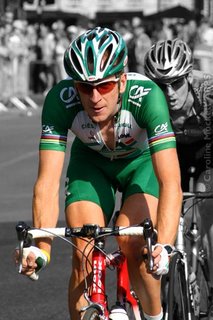 [Above] Olympic golden boy, Bradley Wiggins pushing hard round the Bridge Steet part of the course. 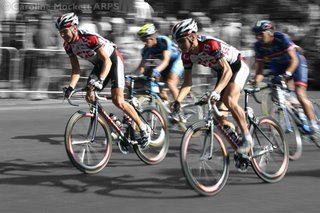 [Above] Members of Team CSC round the corner by Parliament Square in to Whitehall.

I desaturated the colours of the backgrounds of both images, which I think adds more weight to the main subjects. You can see some more pictures from the day in my Cycling (Sport & Action) Gallery.

… Wombling free? Not really! But I was fortunate to have a tour round behind the scenes at the Barbican Centre last night, thanks to a friend who works there. We saw everything from the heat exchangers in the basement (below the water table!), exotic plants in the conservatory, the lighting grid in the theatre (38m/124ft above the stage) and finally the roof, looking out over the City and St Paul’s. Even though the weather wasn’t ideal, the pictures had to be taken!

Here you can see Underground and Overground for yourself: 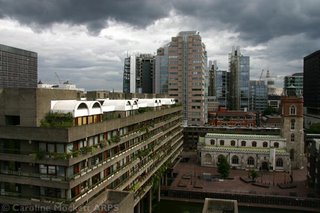 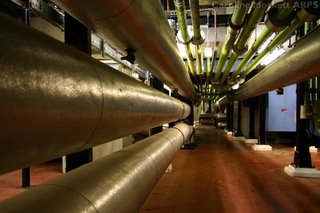 No, we haven’t regressed into the Dark Ages. I’m referring to the fact that my photographic club have their Annual Exhibition starting today in the foyer of London’s Barbican Centre Library. It runs until 29th August, and is open during the same times as the library. I have four prints in the exhibition, showing a wide range of my photographic styles:

The public opening is 6:15pm tonight, 2nd August. Please feel free to come along for drinks and nibbles, or pop and see the exhibition if you are in the vacinity of the Barbican during the next month.