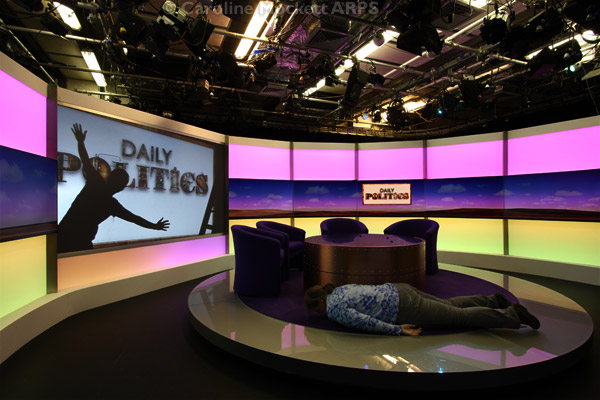 Title: Face Down Tuesday (Political Fatigue Edition)
Location: Millbank, London
Camera: Canon EOS 7D / 10-22mm EF-S f/3.5-4.5 USM
Notes: It’s a while since I last did an FDT shot and the last time I did one in a TV Studio was in N9 at Television Centre for Day #1555 while we were preparing for the last Election programme. As TVC is mostly shut now, we will do the show from the BBC’s Political Unit at Millbank this year, so I’ve been there for a few days starting the setup. I had been moving furniture for most of the afternoon, feeling rather fatigued by it all and needed a lie down. You can see my accomplice Monica fooling around making shadow play behind the back projector screen.
One Year Ago: Day #1561
Two Years Ago: Day #1195
Three Years Ago: Day #830
Four Years Ago: Day #465
Five Years Ago: Day #100