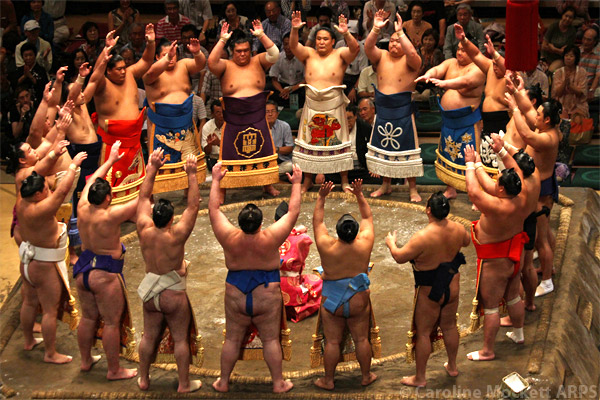 Title: Sumo Makuuchi Ceremony
Location: Ryōgoku Kokugikan, Tokyo, Japan
Camera: Canon EOS 7D / 70-300mm EF f/4.5-5.6 DO IS USM
Notes: Today I went to see the Grand Sumo Tournament at the Ryōgoku Kokugikan with my friend Tomoo. It’s the first time he had been to see it live, although he does watch the coverage on the TV. During the tournament, each fighter will wrestle once a day over the 15 days of competition, against a different opponent each time. There are various grades of fight, the less experienced Sumo fight first thing in the morning while the highest grade – Makuuchi – come on mid-afternoon. They parade around in their ceremonial aprons and form a circle before their bouts begin. I thought this really showed the flavour of the physiques on show!! The fights are quite short – just a couple of minutes usually. And it’s the first one to make a mistake (step out of the ring or land on the ground) who loses! I thought this would make a great shot for Treasure Hunt Theme #74 – Masculinity. Read more about my day.
One Year Ago: Day #1356
Two Years Ago: Day #991
Three Years Ago: Day #626
Four Years Ago: Day #261