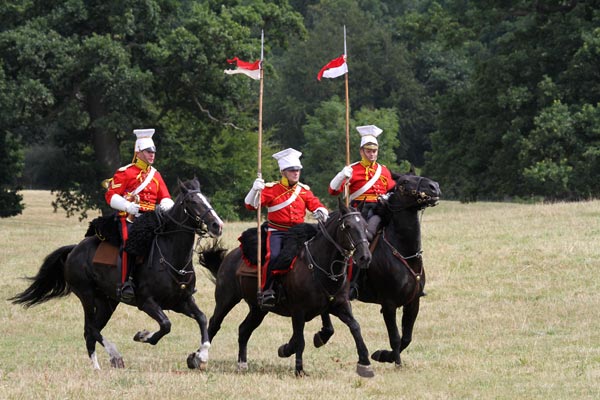 Title: Here Comes The Cavalry
Location: Glemham Hall, Suffolk
Camera: Canon EOS 7D / 100-400mm EF f/4.5-5.6 L IS
Notes: I enjoyed a day out at Glemham Hall in Suffolk, with friends from the Chelmsford Photowalk group. We went to see the Salute To Heroes event which had loads of different eras of re-enactments going on, plus flying displays from the B17 Sally B and the Grace Spitfire. There were so many images to choose from, but I liked this one of  the 16th Lancers Cavalry on the charge. You cans see the other images in the Salute For Heroes Gallery.
One Year Ago: Day #572
Two Years Ago: Day #207 Title: The Major Looses His Monocle
Location: Hylands Park, Chelmsford
Camera: Canon EOS 30D / 70-200mm EF f/4 IS USM
Notes: I went to a battle re-enactment today at Hylands Park, with a couple of friends from the Chelmsford Flickr walk. We had some much better weather than predicted and a rather good day out. The 95th (Rifle) Regiment of Foot and King’s German Artillery were out in force, pretending to do battle against the French in the Napoleonic Wars. They fired cannons, did their rifle drill and camped out making dinner over the fire. They were also terribly friendly and knowledgeable about their history, and more than happy to chat. Here you can see the Major, dropping his monocle in surprise as something happened off-camera. I thought it made the perfect find for Treasure Hunt theme 32: In Costume.
One Year Ago: Day #453
Two Years Ago: Day #88